In medicine, when we find something that works we overuse it. That is as true of antibiotics, anti-inflammatories, and blood pressure drugs as it is for psychiatric drugs.

And this means that some people who really didn’t need the drug in the first place may be suffering unnecessary side-effects. Over time medicine usually corrects with broad studies and new guidelines.

(Although it is as difficult for doctors to convince a patient that he needs to exercise rather than take Prozac, as it is to convince a mother that her child’s cold and earache will run its course with or without antibiotics.)

But to blame psychiatric drugs for violence and murder is patently ridiculous.

In fact, if one extrapolates from the murder rate trends around the world, or just within large Canadian cities, one could make a case for the wide prescription of anti-depressant and anti-psychotic medication being the source of less violence in our societies.

Murder rates in the middle ages were shockingly high by all estimates. Similarly throughout the 1800’s.

In Toronto and Montreal the murder rates climbed from 1900 into the 1960’s, peaking in the mid 70’s and then declining ever since.

The powerful psychiatric drugs were introduced in the 60’s but mostly used within hospitals and outpatient clinics of hospitals. Wider use developed in line with the reduction of psychiatric hospital beds and the introduction of newer drugs in the 1970’s and 1980’s: the so-called atypical anti-psychotics (Risperdal, Seroquel eg) and the SSRI’s for anxiety and depression (Prozac onward).

The increasing use of these drugs within the community and less ill population, when charted, is a reverse image of the declining murder/homicide rates.

Many other factors are at play as well, of course, so I cannot make a case for these drugs specifically being responsible for the declining rate of homicides, but I can from this data be confident that wide-spread use of these medications is NOT increasing the homicide rate. 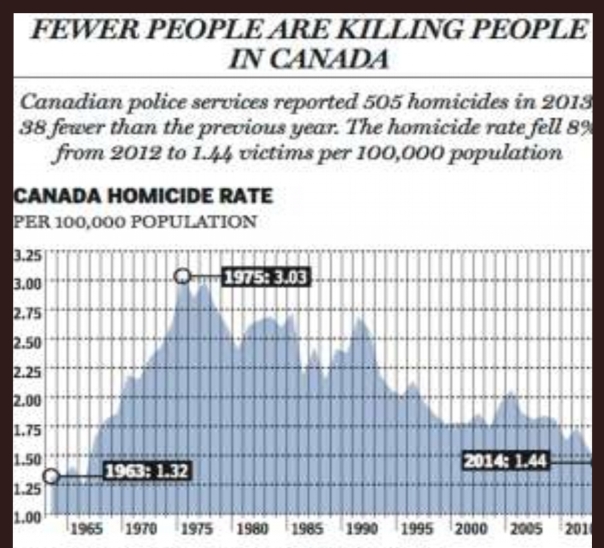 The first group of antidepressants were introduced in the 1950’s, again primarily in hospitals, outpatient clinics and for severe depression. (Imipramine, Amitriptyline)

Prozac, the first SSRI antidepressant was introduced in 1989. Currently 86 people per 1000 in Canada take an antidepressant, usually an SSRI or NSRI medication.

Similarly the first antipsychotics (Chlorpromazine etc.) were introduced in the late 1950’s/early 60’s and were used primarily within the mental hospital population. The second generation only became available in the 1980’s. Currently a little over 1% of the American population takes anti-psychotic medication.

If one considers the percentage of the population that suffers from severe mood disorders it is reasonable to say that the antidepressants are being somewhat over prescribed.

On the other hand if one considers the percentage of the population suffering from a psychotic disorder (schizophrenia, bipolar disorder, psychotic depression, autism with psychosis) the anti-psychotic medications are being underutilized.

But, either way, to blame these medications for violence or homicide in 2018 is ridiculous, as the data clearly demonstrate.

2 thoughts on “Drugs and Violence”